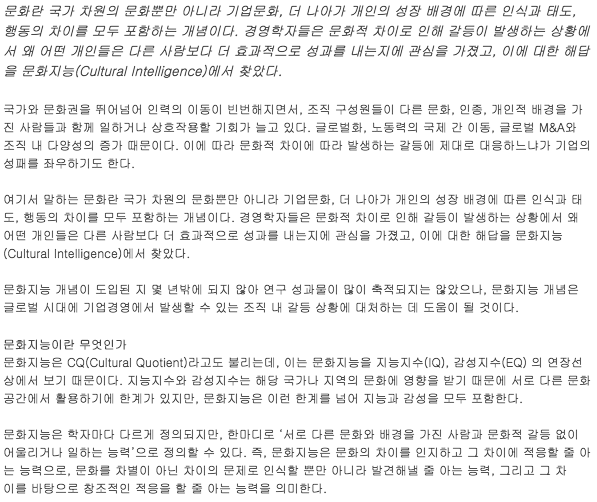 Cultural Intelligence, cultural quotient or CQ, is a term used in business, education, government and academic research. Cultural intelligence can be understood as the capability to relate and work effectively across cultures. Originally, the term cultural intelligence and the abbreviation "CQ" was developed by the research done by Soon Ang and Linn Van Dyne as a researched-based way of measuring and predicting intercultural performance.

The term is relatively recent: early definitions and studies of the concepts were given by P. Christopher Earley and Soon Ang in the book Cultural Intelligence: Individual Interactions Across Cultures (2003) and more fully developed later by David Livermore in the book, Leading with Cultural Intelligence. The concept is related to that of Cross-cultural competence. but goes beyond that to actually look at intercultural capabilities as a form of intelligence that can be measured and developed. According to Earley, Ang, and Van Dyne, cultural intelligence can be defined as "a person's capability to adapt as s/he interacts with others from different cultural regions", and has behavioral, motivational, and metacognitive aspects. Without cultural intelligence, both business and military actors seeking to engage foreigners are susceptible to mirror imaging.

Cultural intelligence or CQ is measured on a scale, similar to that used to measure an individual's intelligence quotient. People with higher CQ's are regarded as better able to successfully blend into any environment, using more effective business practices, than those with a lower CQ. CQ is assessed using the academically validated assessment created by Linn Van Dyne and Soon Ang. Both self-assessments and multi-rater assessments are available through the Cultural Intelligence Center in East Lansing, Michigan and the Center makes the CQ Scale available to other academic researchers at no charge. Research demonstrates that CQ is consistent predictor of performance in multicultural settings. Cultural intelligence research has been cited and peer reviewed in more than seventy academic journals. The research and application of cultural intelligence is being driven by the Cultural Intelligence Center in the U.S. and Nanyang Business School in Singapore.

CQ-Strategy CQ-Strategy is how a person makes sense of culturally diverse experiences. It occurs when people make judgments about their own thought processes and those of others. It includes: Awareness - knowing about one's existing cultural knowledge Planning - strategizing before a culturally diverse encounter Checking - checking assumptions and adjusting mental maps when actual experiences differ from expectations

Cultural intelligence, also known within business as “cultural quotient” or “CQ,” is a theory within management and organisational psychology, positing that understanding the impact of an individual's cultural background on their behaviour is essential for effective business, and measuring an individual's ability to engage successfully in any environment or social setting.

Christopher Earley and his wife Elaine Mosakowski in the October 2004 issue of Harvard Business Review described cultural intelligence. CQ has been gaining acceptance throughout the business community. CQ teaches strategies to improve cultural perception in order to distinguish behaviours driven by culture from those specific to an individual, suggesting that allowing knowledge and appreciation of the difference to guide responses results in better business practice.

CQ is developed through:

cognitive means: the head (learning about your own and other cultures, and cultural diversity)

physical means: the body (using your senses and adapting your movements and body language to blend in)

motivational means: the emotions (gaining rewards and strength from acceptance and success)

Cultural intelligence refers to the cognitive, motivational, and behavioral capacities to understand and effectively respond to the beliefs, values, attitudes, and behaviors of individuals and groups under complex and changing circumstances in order to effect a desired change.

Cultural knowledge and warfare are bound together as cultural intelligence is central to ensuring successful military operations. Culture is composed of factors including language, society, economy, customs, history, and religion. For military operations, cultural intelligence concerns the ability to make decisions based an understanding of these factors.

In the military sense, cultural intelligence is a complicated pursuit of anthropology, psychology, communications, sociology, history, and above all, military doctrine.

Diplomacy is the conduct by governmental officials of negotiations and other relations between nations. The use of cultural intelligence and other methods of soft power have been endorsed and encouraged as a primary tool of statecraft as opposed to more coercive forms of national power; its further development is being stressed as a primary exercise of power as opposed to the expensive (politically and financial) coercive options such as military action or economic sanctions. For example, in 2007, US Secretary of Defense Robert Gates called for “strengthening our capacity to use ‘soft’ power and for better integrating it with ‘hard’ power,” stating that using these other instruments “could make it less likely that military force will have to be used in the first place, as local problems might be dealt with before they become crises.”.” In a speech in 2006, Secretary of State Condoleezza Rice urged similar actions in support of her doctrine of “transformational diplomacy;” she made a similar speech, again, in 2008.

Governmental negotiation and other diplomatic efforts can be made much more effective if knowledge of a peoples is understood and practiced with skill. Joseph Nye, a leading political scientist, asserts in his book, Soft Power, that, "a country may obtain the outcomes it wants in world politics because other countries – admiring its values, emulating its example, aspiring to its level of prosperity and openness – want to follow it. In this sense, it is also important to set the agenda and attract others in world politics, and not only to force them to change by threatening military force or economic sanctions. This soft power – getting others to want the outcomes that you want – co-opts people rather than coerces them."

The sorts of effects Nye describes are much more effective if there is a willingness on the part of the influencing agent to respect and understand the other agent’s cultural background. An example of diplomacy was a provision within the USA PATRIOT Act “condemning discrimination against Arab and Muslim Americans” response to the events of 9/11. This provision ensures the protection of U.S. Muslims and Arabs, ensures a distinction between them and those that committed those terrorist acts, and lives up to the ideals of the U.S. constitution of non-discrimination. This precedent sets up an attitude of an awareness of and respect for peaceful, law-abiding Muslims.

However, cultural intelligence can be used to the opposite effect. In 2006 and 2007, Russian president Vladimir Putin used his knowledge of German chancellor Angela Merkel and her fear of dogs to intimidate her during negotiations by bringing his Labrador Retriever, Koni. A similar, unintentional gaff occurred in 1968 when President Richard Nixon flashed the A-OK hand gesture to Brazilians as he stepped off his plane. A gesture that means things are good in America is the equivalent of the middle finger in Brazil – and an unintentional offense that could have been avoided had Nixon known about this cultural difference.

Cultural intelligence in the U.S. military

Cultural Intelligence as a U.S. military term did not gain prominence until the late 20th century with the rise of low-intensity and counterinsurgency warfare. However, the importance of cultural intelligence has only recently become commonly accepted with the counterinsurgency campaigns the U.S. has conducted in Afghanistan and Iraq.

Since the Iraq War and the War in Afghanistan, cultural intelligence is being seen as playing a more important role in the success of military operations in counterinsurgency. The U.S. Army and Marine Corps Counterinsurgency Field manual is explicit on this point:

“Cultural knowledge is essential to waging a successful counterinsurgency,” and goes further, urging “counterinsurgents… should strive to avoid imposing their ideals of normalcy on a foreign cultural problem.”

The manual’s logic is that the “primary goal of any COIN operation is to foster development of effective governance by legitimate government.” And the manual points out that different cultures have different ideas of what legitimacy entails, and that operations at building legitimacy need to meet the host nation’s peoples’ criteria. Failure to recognize and respect a host nation’s culture has resulted in the deaths of some NATO troops, and attempts have been made to make Afghans aware of Western culture and vice versa to mitigate some of these unintentional effects. But the cultural attitudes of the host nation’s peoples aren’t the only consideration. The culture of the insurgents is crucial as well – for that information helps to develop “effective programs that attack the insurgency’s root causes.” In this way, this information helps to shape counterinsurgent military operations.

To this effect, the U.S. Army has developed the Human Terrain System to provide cultural information of host nations. To date, the HTS program remains the primary unified effort to provide this information to supplement military operations in areas where armed services are deployed. The program is also controversial, with the American Anthropological Association arguing that such efforts represent a conflict of interest and a possible violation of the ethical standards of anthropologists; but is has been defended by others as ethical. Despite these objections, the military continues to employ this program with the hope of relying less on traditional military operations, and instead on diplomatic and civilian efforts, all with more effect.

r your admission and consulting