The Common European Framework of Reference for Languages: Learning, Teaching, Assessment, abbreviated as CEFR or CEF, is a guideline used to describe achievements of learners of foreign languages across Europe and, increasingly, in other countries (for example, Colombia and the Philippines). It was put together by the Council of Europe as the main part of the project "Language Learning for European Citizenship" between 1989 and 1996. Its main aim is to provide a method of learning, teaching and assessing which applies to all languages in Europe. In November 2001 a European Union Council Resolution recommended using the CEFR to set up systems of validation of language ability. The six reference levels (see below) are becoming widely accepted as the European standard for grading an individual's language proficiency.

In 1991 the Swiss Federal Authorities held an Intergovernmental Symposium in Rüschlikon, Switzerland, on "Transparency and Coherence in Language Learning in Europe: Objectives, Evaluation, Certification". This symposium found that a common European framework for languages was needed to improve the recognition of language qualifications and help teachers co-operate, eventually leading to improved communication and cooperation among language teachers in Europe.

As a result of the symposium, the Swiss National Science Foundation set up a project to develop levels of proficiency, to lead on to the creation of a "European Language Portfolio" - certification in language ability which can be used across Europe.

A preliminary version of the Manual for Relating Language Examinations to the Common European Framework of Reference for Languages (CEFR) was published in 2003. This draft version was piloted in a number of projects, which included linking a single test to the CEFR, linking suites of exams at different levels, and national studies by exam boards and research institutes. Practitioners and academics shared their experiences at a colloquium in Cambridge in 2007 and the pilot case studies and findings were published in Studies in Language Testing (SiLT). The findings from the pilot projects then informed the Manual revision project during 2008/09. 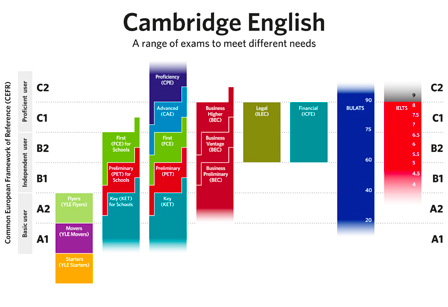 The CEFR adopts an action-oriented approach that, according to Carlos César Jiménez of Universidad Nacional Autónoma de México, can be traced back to theoretical proposals made by philosophers of language such as Ludwig Wittgenstein in the 1950s and sociolinguists such as Dell Hymes. The approach regards language users as social agents who develop general and particular communicative competences while trying to achieve their everyday goals.

General and particular communicative competences are developed by producing or receiving texts in various contexts under various conditions and constraints. These contexts correspond to various sectors of social life that the CEFR calls domains. Four broad domains are distinguished: educational, occupational, public, and personal.

A language user can develop various degrees of competence in each of these domains and to help describe them the CEFR has provided a set of Common Reference Levels.

The Common European Framework divides learners into three broad divisions that can be divided into six levels; for each level, it describes what a learner is supposed to be able to do in reading, listening, speaking and writing. These levels are: 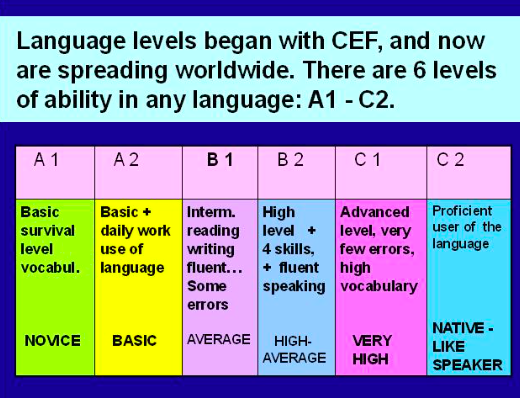 These descriptors can apply to any of the languages spoken in Europe, and there are translations in many languages.

Rest of the world

The table below summarizes the correspondences between CEFR levels and common language proficiency scales around the world.